Jaquesí rivals were, in the main, just derivative, either making high quality
copies that sold on merit or cheap, low quality pastiches that served the correct
purpose. But, one highly innovative rival burst upon the scene like a comet
in 1891. In the summer of that year, the British Chess Company, BCC, founded
by the charismatic William Moffatt (1843-1918) and William Hughes, launched
an attack on the hegemony of Jaques with a series of innovations. BCC introduced
the newly developed plastic Xylonite to cast the heads of knights. Xylonite, or
celluloid, is still used today to make table tennis balls and guitar picks. At the
end of 1891, BCC produced a catalogue illustrating their ØRoyal ChessmenÆ
range, registered design 177079 on 22 August 1891 to Moffatt, and their ØImperialÆ
or ØImproved StauntonÆ.

Imperial or ØImproved StauntonÆ chessmen in the 1891 catalogue. By 1893, a knight with
a shorter dressage mane had been introduced and the set was called just the Staunton.

Data on the BCC are sketchy, but research by Mick Deasey has revealed much about
their history. They are known best from their extensive advertising and heroic efforts
in promoting chess, from publishing to being involved in matches from English counties
to trans-Atlantic telegraphy. Between 1891 and 1902, they marketed aggressively and
used the English master J. H. Blackburne to promote their wares, just as Jaques had
done with Staunton fifty years before. They then disappeared just as rapidly. It is
most likely BCC stopped producing their own sets in about 1901-1903, with other
chess activities continuing for a few more years.

The best BCC sets are extremely collectible because of their rarity and quality. They also
used crown stamps to denote kingís side rooks and knights. Some sellers, either
from ignorance or deliberately, attempt to boost the price of their sets by describing
every unsigned crown-stamped set as BCC. But, the archetypal BCC set has: knights
with Xylonite heads and crowns (or starburst, or even a simple circle) on the wooden
bases; and rooks with only four crenellatio. The exceptions to the Xylonite knights are
late cheaper sets, which have crude wooden knights and 5 crenellations to the rooks, or
extremely rare top grade sets where hand carved knights could be bought as an upgrade.
They even made complete sets from Xylonite and, very rarely, in ivory to the same styles. 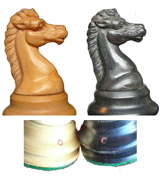 Xylonite knights, as in the 1891 catalogue. Kingís side bases usually have crowns,

but sometimes simple circles, or starbursts. Rooks from the better or earlier sets
always have crowns and four crenellations to the rook.

BCC took on Jaques on every front. They produced a wide range of styles in addition
to their variants of the Staunton, marketed chess timers, produced books and disputed
Jaquesí right to monopolise names, as in Figure 76, from an 1893 catalogue. They
delighted in attacking the Jaques knights. 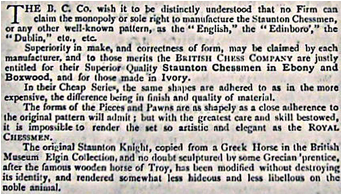 Broadside on Jaques published in 1893. Pure calumny about the Jaques knights Å what venom!

The registered design was for the Royal chessmen, designed by Moffatt. The bishop has a
very angular mitre, and the crenellations of the rook are angled inwards. There is a distinctive
ring above the base. These sets are rarely seen and presumably were not as popular as the
regular Staunton. 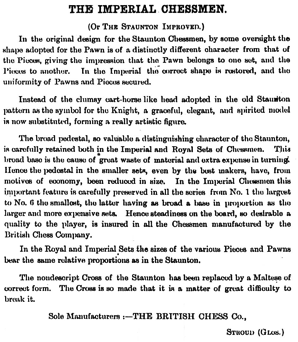 Preamble in 1891 catalogue, libelling, perhaps justifiably, the Jaques knights again Å
they had deteriorated from the early high standards.

Imperial or ØThe Staunton ImprovedÆ or Staunton

The second set in the 1891 catalogue is the Imperial or ØImproved StauntonÆ. By 1893, it was
known simply as the Staunton. It was the most successful of the sets and the Nos. 3 and 3s
are relatively common. The magnificent large club size below is in mahogany case of
similar quality to that of Jaques with a fine label, but with poorer hinges. The white knights are
the very rare hand carved upgrades, but the black are Xylonite. BCC had
difficulty initially in matching the boxwood colour in Xylonite. 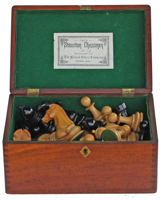 BCC could never sit still. They later introduced a double collar to the pawn, either for extra
strength or to match the other double rings.

But, how radical was the design? Not very. The bishop is modelled very closely on the Jaques of t
he period. Jaques introduced a bishop with a more flame-shaped mitre at the end of the 1890s,
and BCC followed suit (Figure 85). It is true, though, that the hand carved BCC knight is
distinctly superior and harks back to the very early Jaques knights.

White pieces are from a large club size Jaques dating to 1890-1895. The black are the equivalent
BCC 1S large club. The pieces are very similar, and the bishopsí mitre especially so. The
Jaques weighs 1.705 kg, and the BCC 2.56 kg, being much more heavily weighted. The
BCC is exceptionally stable and well finished.

Around the turn of the century, the ever active Moffatt introduced sets in which the height of
the pieces more closely reflected their value on the chessboard. The traditional Staunton rook
is shorter than the bishop. The new rook is slightly taller than the bishop, which is marginally
taller than the knight and. (Figure 86). The knight is carved and not Xylonite.

Just to confuse the situation, BCC simultaneously introduced a new Imperial design, which was
very radical and quite different from the original Imperial Staunton. The pieces are very ornate,
and the bishops revert to old English styles.

Note the Eastern tear drop finial to the king, and not a cross.

BCC launched an attack on the mass market with their popular series. They eschewed the wide
stable base of the superior quality Stauntons, used cheap knights and rooks with five crenellations
for some reason, probably because they were bought in. 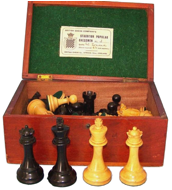 ØSTAUNTON POPULAR CHESSMENÆ, Size 3, loaded. Note the simple box, no lock and just hook
and eye, unlined apart from lid. The crude wooden knights have crown on kingís side base, and the
rooks have 5 crenellations. Other styles were marketed in the ØPopularÆ series.

Rooks with five crenellations. They and the knights still stamped in the usual way.

They also sold very cheap sets - ØCommon Chessmen Å Foreign MakeÆ. BCC marketed a
complete range of accessories for chess and advertised a variety of styles, including English,
which are now largely lost. They sold a travel set identical to the Jaques Whittington. They
had their own ØIn Statu QuoÆ travel set based on a sharp pin under each piece that would stick
into a board.